OLED microdisplay maker eMagin reported its preliminary financial results for Q4 2022 - the company expects revenues to be in the range of $8.1-8.3 million, up from $7.2 million in Q4 2021. The company says this was a positive quarter with strong bookings. The company's open order backlog at the end of 2022 was $16.7 million. 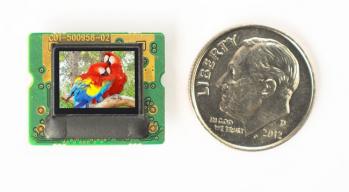 eMagin says that this was its fifth consecutive quarter in which it achieved year-over-year growth in product revenue. The company was cashflow positive in the quarter and now has $4.2 million in cash and equivalents. eMagin expects the delivery of an advanced, production-capable, dPd organic deposition tool in the second quarter of 2023.

In 2021 The Korean government launched a new project that aims to develop technologies for the production of OLED microdisplays for AR applications. The project is led by AP Systems (APS Holdings), and aims to produce a direct emission OLED microdisplay with a resolution of 4,000 PPI by 2024. Earlier this year APS developed FMM masks that reached 1,000 PPI. 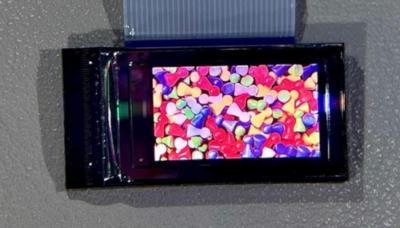 APS now announced that it has produced a 3,000 PPI direct-emission OLED microdisplay, based on its FMM technology. This is very impressive progress.

Reports from Korea suggest that Meta (Facebook) is in talks with both Samsung Display and LG Display, regarding the supply of OLED microdisplays and microLED microdisplays for its future AR and VR glasses.

According to the reports, dozens of executives from Meta have met with executives from LG Display and Samsung Display, and the discussions are still ongoing. According to other reports, Meta plans to use OLED displays in its upcoming VR glasses, and MicroLEDs in AR glasses that will hit the market at around 2026. 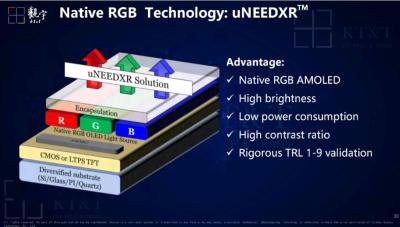 The new panel is based on KT&T's own uNEEDXR technology, which is a direct-emission (no color filters) design. The display achieves very high brightness and high efficiency.

Samsung Display has recently launched an OLED microdisplay project, hoping to supply displays to Apple and other AR developers. Samsung is still at an early stage of development, aiming to start producing displays by 2024, with limited capacity.

SDC's first generation displays will adopt a WOLED-CF architecture, which uses a white OLED emission layer with color filters. This is the same design used by almost all OLED microdisplay developers, but one that seriously reduces the brightness and efficiency of the display.

eMagin says that it achieved increased sales of displays in both the defense sector (mainly the ENVG-B program) and also to the veterinary and surgical markets.

According to SNU Precision's web site, the company is set to release a new tool that will enable the deposition of direct-emission OLED materials on silicon wafers for microdisplay panels.

SNU Precision says that the new tool will support both R&D settings and mass production, with support for 200 mm and 300 wafers. The tool will launch "soon" but SNU does not give more details.

OLEDON says that it has developed a new curved plane-source evaporation shadow mask process that can be used for OLED microdisplay fabrication, with a potential density of 10,000 PPI (minimum shadow distance of 0.18um). Using this technology it will be possible to create direct-emission microdisplays.

In the video above, you can see the lecture OLEDON's CEO gave last month at iMID 2021, that explains the new technology.

Taiwan-based INT Tech announced that it has produced new AMOLED microdisplay samples at its $143 million fab in Taizhou in Zhejiang province, China, and the company is still on track for mass production in Q4 2021.

The new 0.7-inch INT Tech uNEEDXR display is a direct-emission display that features a brightness of over 5,000 nits, 3147 PPI and a low power consumption (less than 500mW@5000nits).

OLED microdisplay maker eMagin has been developing direct-emission OLED microdisplay (also called directly-patterned, or dPd) for many years, and is considered to be the leading company - the closest one to commercialize such a display. A dPd will enable much higher efficiency/brightness compared to current designs based on color filters.

In the past eMagin reported of several leading companies that have licensed the technology and/or are working with the company towards the design of custom dPd OLED displays for future AR/VR products. In 2017 for example eMagin reported of a Tier-1 CE company that licensed its dPd tech, and in 2020 the company said it started a new consumer-related AR development project for a next-generation display for a Tier-1 customer.