Reports from Korea suggest that Meta (Facebook) is in talks with both Samsung Display and LG Display, regarding the supply of OLED microdisplays and microLED microdisplays for its future AR and VR glasses.

According to the reports, dozens of executives from Meta have met with executives from LG Display and Samsung Display, and the discussions are still ongoing. According to other reports, Meta plans to use OLED displays in its upcoming VR glasses, and MicroLEDs in AR glasses that will hit the market at around 2026.

Meta's latest Quest Pro VR headset use Mini-LED LCD displays. Moving to OLED displays will enable a smaller design, and a much more efficient one that will last longer and will require less cooling.

LG Display has been developing OLED microdisplay technologies for several years, and it is now stepping up its efforts and aiming to build its first production line. In 2020 LG Display unveiled its OLEDoS brand of OLED microdisplays. LGD's display was a 0.42" 1280x720 (3,500 PPI) panel that uses a color-filter based design. The display offers a brightness of 5,000 nits. In 2021 LGD revealed that it is developing a 1.16" 3K OLED microdisplay, and also a 4K one.

LGD recently commented that recent improvement in OLED technologies will cause an industry shift from LCoS devices to OLED microdisplays in AR systems. LCoS will find a market in low-cost AR headsets, but most AR solutions will be based on OLEDs. Next-generation VR systems, which will require higher pixel densities, will also switch from LCD and mobile AMOLED displays to OLED microdisplays that will offer pixel densities of over 3000 PPI.

MicroLED microdisplays (LEDoS) is also a viable technology and a competitor to OLEDs, and LG Display continues to watch microLED technology development. According to our information, the company is actively developing microLED AR technologies.

Samsung display recently announced it has launched its own OLED microdisplay project - that is still at an early stage of development. Samsung plans to start mass producing OLED microdisplays in 2024, but full commercialization will only be achieved in 2026. 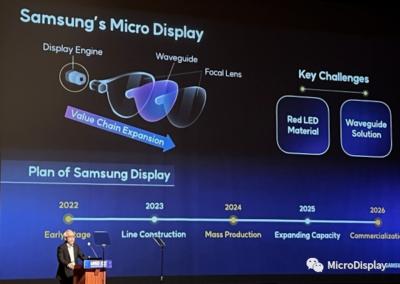 Samsung says that displays for AR and VR applications is one of its focus areas. It was reported that Apple has specifically reached out to Samsung to develop OLED microdisplays for future AR devices.

Disclosure: the author of this post holds some shares in eMagin

Is current OLED architecture obsolete? An interview with the head of Germany's Max Planck Institute
The price of Iridium is at an all-time high, will that effect the price of OLED materials and displays?
PPML shows two new OLED Lighting designs
Xiaomi launches a transparent OLED TV for the consumer market
LG Displays adopts its MLA technology to its new gaming monitors
Loading content ...
Loading content ...