OLED is an emerging display technology that is fast becoming the mainstream display technology in many markets, as OLED enables display panels that offer the best image quality and free design as they can be made flexible and transparent. The Samsung OLED displays are considered to be the best in the industry and the Korean company is the clear lead in AMOLED production for mobile devices.

Over the pay years Samsung invested billions of dollars in OLED research and production facilities as the company sees OLEDs fast replacing LCD displays in all mobile applications.

Samsung is currently producing over 300 million AMOLED displays in a year, used mostly in smartphones - such as Samsung's own Galaxy S7 (and S7 edge ) - but also in smartphones from Gionee, Meizu, Acer, HP, Vivo, Microsoft, Lenovo, ZTE, Hisense, Konka and others. Samsung also produces large mobile OLEDs for tablets, laptops and monitors.

In August 2013 Samsung launched the company's first OLED TV, the KN55S9C, which used a curved 55" OLED panel. The TV was priced at around $8999 in the US and Korea, but is no longer in production, and was never in real mass production. Samsung has yet to return to OLED TV production. 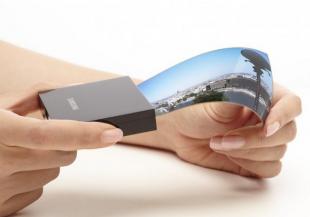 Samsung is developing several next generation display technologies based on OLEDs. Samsung has been developing a foldable OLED device for a long time - which may dramatically change the mobile device market as it could enable smartphone to turn into tablets or phones that can be folded into smaller devices.

Several years ago Samsung released the following video, showing a concept transparent flexible AMOLED tablet device. It will be years before Samsung can commercialize such a display, but it's nice to see what the future holds:

Nintendo disclosed that it shipped over 5.8 million Nintendo Switch OLED devices, since launching the new gaming console in October 2021.

Samsung Display unveils new OLED displays at SID Displayweek 2022. First up is the Flex G flexible display, which folds inwards twice, and the Flex S, that can fold both inwards and outwards. 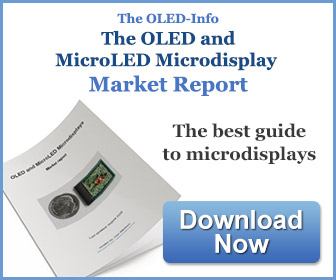 Reports from Korea suggest that LG Display is looking into adopting a microLens array in its large OLED TV panel architecture. The microlens layer could boost brightness by up to 20%, which will also increase efficiency (if brightness is kept as before).

According to the report, the project is at an advanced stage, and panels with the microLens array could be introduced by the end of this year. LGD will apply the technology to its OLED.EX panels, so brightness could reach up to 1,200 nits. LGD considers this technology as it faces competition in large-area OLED production, from Samsung's QD-OLED panels, for the first time.

BOE has been aiming to supply OLED displays for Apple for a long time, and Apple also welcomed BOE as a supplier as it wants to reduce its dependence on Samsung and LG.

In 2020 BOE did not pass Apple's OLED quality test for the iPhone 12, but later it it did manage to enter Apple's supply chain, for aftermarket (refurbished models) 6.06" LTPS AMOLED displays.

Apple asks Samsung to lower its OLED iPhone shipments by 15% in 2022, and Samsung is not pleased

An interesting report from Korea suggests that Apple's CEO met with Samsung Display's CEO recently, as Apple is looking to reduce its OLED iPhone orders from Samsung by around 15% in 2022.

Apple, like the rest of the technology industry, is facing supply constraints and has already said that it won't be able to meet the demand for its products in 2022. Apple's original plan was to produce 220 million iPhones in 2022, and it expected to order 160 million iPhone AMOLED panels from SDC. Apple's now expects to ship only 185 million iPhones.

Samsung Display announced that its OLED displays for laptop applications has received 'Halo Free' verification from the safety science leader, UL, for its glare-free and sharp picture quality.

Samsung explains that LCD displays suffer from light-blurring which occurs when the outline of a bright subject appears white on an image with sharp contrast. This is because even with local dimming, LCDs cannot adjust the backlight brightness exactly on the edge. OLEDs, with their self-lit pixels, do not suffer from this.

Reports from Korea suggest that Samsung Display is starting to install production equipment in its new 6-Gen AMOLED fab in Asan. The A4-2 line (previously called the A4-E line) is a converted old LCD fab(L7-2) that was closed in early 2021.

It is estimated that the A4-2 line will cost around $800 million USD. Samsung hopes to start production in the new production line by Q3 2022, and monthly capacity will be 12,500 substrates.

Samsung Display recently started producing QD-OLED panels (for TV and monitor applications), and according to earlier reports, the production suffered from low yields, estimated at around 30-50% a few months ago.

In a move that is thought to reassure SDC's employees, the company announced on its internal bulletin board that it has managed to increase its QD-OLED production yields to 75%, and it now aims to increase that to 90% or higher.

According to reports in Korean media, Samsung is developing a new process which will allow it to reduce the thickness of its QD-OLED panels.

The current QD-OLED design uses two glass substrates, one for the TFT backplen (and the OLED frontplane materials), and one for the QD conversion layer. The new plan is to remove the QD glass substrate, and inkjet print the QDs directly on the OLED TFE encapsulation layer.