OLED is an emerging display and lighting technology that enables beautiful and efficient displays and lighting panels. Thin OLEDs are already being used in many mobile devices and TVs.

LG Display is one of the leaders in OLED production. LG Display started producing flexible OLEDs for mobile devices in 2015, initially focusing on small wearable OLEDs - for devices such as Apple's Watch and LG's own wearables.

In October 2017, following a large expansion in LGD's AMOLED production capacity, LG Display started to produce large flexible OLEDs for smartphones. This is when LGD also started to brand its OLED displays as pOLEDs (p is for plastic). LGD now provides its pOLED displays for several smartphone vendors, including Apple.

LG Display has several flexible OLED production fabs. The first one was a pilot 4.5-Gen line, with limited capacity - and so the E2 line is used to produce LGD's flexible wearable OLED displays.

LG Display's second pOLED fab is is its E5 line in Gumi, which has a monthly capacity of 7,500 monthly 6-Gen substrates (or about 1.5 million 5.5" panels at 100% yields). LG Display's thoird line is the E6 line in Paju which is another 6-Gen line, but with a larger capacity of 15,000 monthly substrates.

LG's fourth flexible OLED line may be built at the company's large P10 display production complex in Paju. The P10 will be a large display complex with a total investment of close to $10 billion - but will mostly produce OLED TV panels. It could include a flexible OLED line, but LG's plans are not finalized yet, its seems.

LG Display announced that it has raised $1 billion in long-term loans from international banks, that will be invested in expanding its OLED module production line in Vietnam.

In September 2021 LGD announced it is set to expand its Hai Phong fab capacity to 13-14 million monthly units, in a $1.4 billion investment. It's not clear whether the new funds are an addition to that, or is this the funding for the 2021 announcement.

The 2022 Mercedes EQE electric car comes with either a 12.8-inch AMOLED or (optionally) Mercedes' MBUX Hyperscreen. The Hyperscreen is a 56-inch display, actually made from three different OLED units, embedded in a single glass display. There's a central 17.7-inch panel plus two 12.3-inch panels. The 56-inch glass also includes holes for the air-vents which are integrated into the display.

The MBUX Hyperscreen was first used in the higher-end EQS electric car. The 'lower-end' 12.8-inch AMOLED screen, shown below, is used in the 2021 S-class cars. We speculated that LG Display is supplier to Mercedes (the two companies have been working together since around 2016) and LG Display earlier this week officially confirmed that it is indeed Mercedes' OLED supplier.

LGD says that it enjoyed high demand for IT panels, and its large-size OLED business continues to "strengthen its position in the market as the premium TV sector continues to grow". LGD expects to ship 8 million OLED TV panels in 2021, with record annual profit.

Cadillac announced that the upcoming 2023 Lyriq EV will sport a wide 33-inch "advanced LED" display, and according to reports online this will actually be an OLED display.

This makes sense, as Cadillac is already using OLEDs in its premium cars. The 2021 Escalade has a 38-inch LGD P-OLED display, that comes standard in all Escalade versions.

LGD to increase pOLED production capacity in a $2.8 billion investment

A few weeks ago LG Display noted that it is reviewing a plan to expand the capacity of its mobile OLED production plants, and today LGD announced its formal plan to invest 3.3 trillion Won (around $2.8 billion) to expand pOLED capacity. 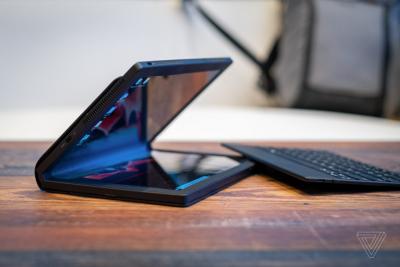 LGD will expand its 6-Gen AMOLED production capacity, and this expansion project will finish by March 2024. LGD did not provide any more details about this plan. LGD is enjoying high demand for its mobile AMOLED displays, with Apple one of its major customers.

Market research company Omdia estimates that LG Display held a 92.5% share in the automotive AMOLED panel market in 2020, in terms of sales. Samsung Displays accounted for 6.9% and BOE 0.6%.

OMDIA estimates that the total AMOLED automotive market in 2020 was 240,000 units, and says that the market will experience a fast growth of 60% CAGR to reach 4.4 million units in 2025.