UBI Research says that as OLED makers are diverting all efforts into flexible OLED production, thin film encapsulation (TFE) is gaining in popularity. Between 2017 and 2021, TFE will be applied to about 70% of all OLED panels in production. The OLED encapsulation equipment market will generate $11 billion in sales. 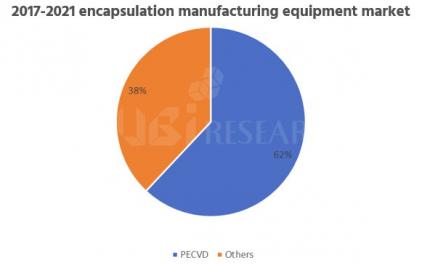 TFE encapsulation started out as a complex technology that required 11 layers and was slow and expensive. Recent advances allowed OLED makers to reduce the number of layers to just 3 and increase productivity and yields and so lower the production costs. Some film OLED makers opted for hybrid encapsulation (which uses a barrier film) but TFE seems to have become the technology of choice.

Production laser deposition equipment developer Solmates announced that it has sold a small panel (200x200 mm) PLD tool to CSOT, to be used in the company's pilot OLED line that is being built in Wuhan, China. CSOT will use the new tool to deposit the ITO electrodes on OLED displays. 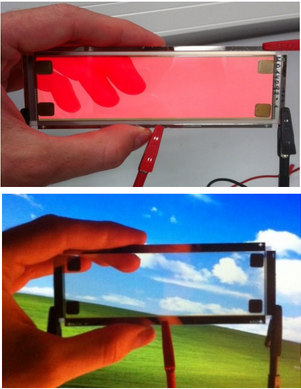 Solmates patented the process of OLED ITO electrode deposition using PLD and has developed the technology that enables large-area deposition of ITO on room temperatures. The PLD process results in very high quality ITO deposition and Solmates says that the achieved transparency is higher than currently used methods. Solmates' tool will be placed in CSOT's new cluster tool that is place in Wuhan since the end of 2016. Solmates will deliver the tool in June 2017. The current tool is used for R&D, but the technology can be scaled to larger substrates and to be used in production systems.

The CONx TFE system compreses of Meyer Burger's proprietary remote plasma PECVD for inorganic coating and its PiXDRO inkjet printing technology for the deposition of accurately positioned and homogeneous organic layers. Meyer Burger says that the system provides excellent water and oxygen barrier properties without compromising the optical transparency of the encapsulation layer all the while operating at low temperatures and low ion bombardment.

A few days ago we reported that Kateeva says it has taken a "commanding lead" in the OLED thin film encapsulation (TFE) market with its ink-jet based systems. Kateeva's ink-jet printers are used to deposit organic materials, but the full TFE stack also contains in-organic materials.

Currently both LG and Samsung producers are using PECVD to deposit the in-organic materials, but according to a report from ETNEws, both Korean display makers are thinking about switching to ALD. Several companies, including Jusung Engineering, WONIK IPS, AP Systems and TES has ALD-based encapsulation deposition systems ready to be used in display production. Both LG and Samsung have finished with R&D work on ALD technology and are ready to introduce commercial systems into their production lines.

Kateeva recently announced a large $88 million Series-E funding round, and the ink-jet equipment maker today announced that Ink-Jet guru Eli Vronsky has been promoted to the company's Chief Product Officer. 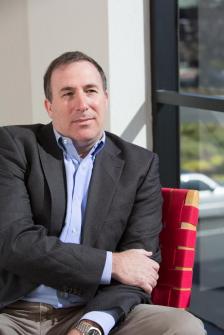 During our recent visit to San Francisco, we caught up with Kateeva’s executive team on a break from their presentations on inkjet printing for flexible OLEDs. Chief Product Officer Eli Vronsky gave us an update, as well as an overview of the company’s product strategy. 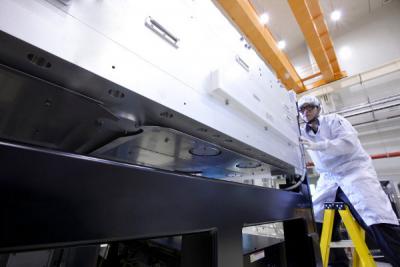 The two new systems are the AKT-20K (925x1500 mm substrates) and the AKT-40K (1250x2200 mm substrates). Both systems offer the ability to deposit diffusion barrier films with very low water and oxygen penetration. These high-performance films are deposited at low temperatures of

A few months ago Aixtron acquired US-based thin-film encapsulation (TFE) developer PlasmaSi for $16 million, and today Aixtron announced that they have sold the first Optacap-200 encapsulation tool to a major Asian display manufacturer. The R&D system was ordered in Q3 2015 and will be delivered in Q1 2016. 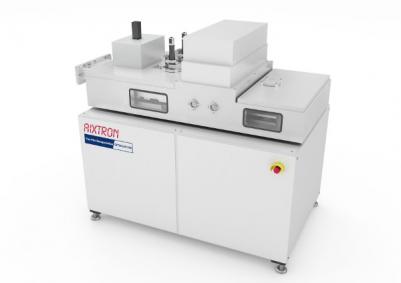 The OptaCap-200 is a standalone R&D system that substrate sizes of 200x200 mm. This is a plasma-enhanced chemical vapor deposition (PECVD) technology that can be used to deposit highly flexible and effective barrier films for thin-film encapsulation for OLED and OPV panels. 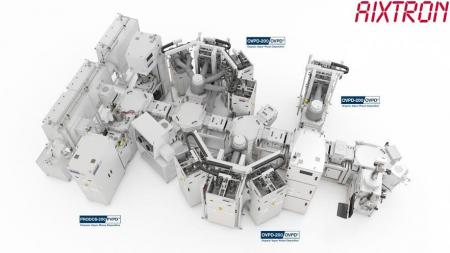 Applied Materials announced three new systems that are used to deposit Metal-Oxide (mostly IGZO) TFTs for both LCD and OLED displays. First up is the AKT-55KS, a plasma enhanced chemical vapor deposition (PECVD) system that handles 8.5-Gen substrates (2.2x2.5 meters). Applied says this system is defect-free and excels at keeping hydrogen out of the CVD). 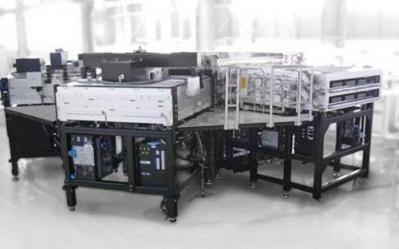 Applied Materials announced two new film deposition systems, used to make high definition televisions and high-resolution mobile device displays - both OLEDs and LCDs. First up is the AKT-PX-PECVD system (shown below) that can be used to deposit LTPS films on large glass substrates (sized from 1.6 m2 to 5.7 m2). 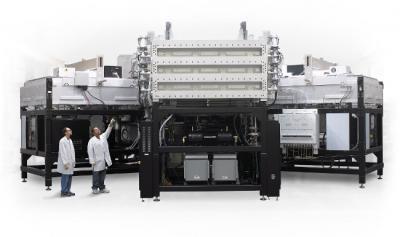 The second system, the AKT-PiVoT PVD system is used to deposit metal oxide-based TFTs (IGZO in particular). Applied says that this new system is capable of overcoming "mura effects" that reduce the quality of the display. It also offers "breakthrough" stability which makes is suitable for OLED displays and TVs.