n-tech Research released a new Micro-LED market report in which they estimate that the market will grow from $2.7 billion in 2019 to over $70 billion in 2027. The markets for Micro-LED displays, according to n-Tech, will include wearables, near-eye displays, HUDs, projection displays and extra large area displays. 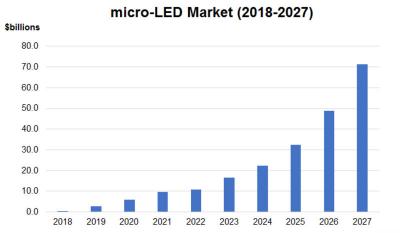 n-Tech says that Micro-LEDs, however, will find it difficult to penetrate some important display markets - such as smartphone displays, tablets and TVs. LCD and OLEDs will continue to dominate these markets.

n-Tech is very optimistic about Micro-LED displays - at first glance it is quite difficult to believe that the market will be able to grow from practically zero to $2.7 billion within one year - most analysts believe it will take around 3 years for Micro-LED displays to actually reach real commercialization.

At second glance, it seems that n-Tech considers mini-LED backlighting for LCDs as Micro-LED displays - in addition to Micro-LED lighting and displays such as Samsung's Wall (which most analysts consider an emissive mini-LED display). 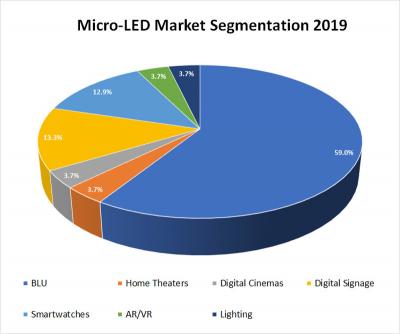 According to n-Tech 2019 market segmentation chart above, you can see that most of the revenues in 2019 will be from backlighting units (probably mini-LEDs). N-Tech believes smartwatch micro-LED displays will generate $350 million in 2019, this also seems to be highly optimistic. It is likely that n-Tech believes that Apple will switch to micro-LED displays in all of its 2019 Watch devices.