OLED (Organic Light Emitting Diodes) is a new technology that enables brighter, more efficient, thinner, faster and better looking displays. OLED panels feature better refresh rates and contrast than either LCD or Plasma - and can be made flexible and transparent.

Sony has been involved with OLED research, development and production for years, and can claim several OLED firsts: in 2004 they launched the world's first PDA with an OLED display (the 3.8" Clie PEG-VZ90), the world's first OLED TV in 2007 (the 11" XEL-1) and for a while they offered the largest OLED displays (the 24.5" BVM-F250 professional OLED monitors). Today Sony produces OLED TVs - using panels produced by LG Display. 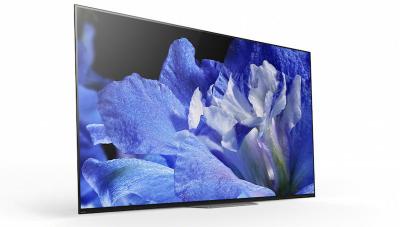 In the past Sony was collaborating with Panasonic on OLED TV production technology, but this collaboration was later canceled.

In past years, Sony released several mobile devices that adopted OLED displays. The original portable Vita gaming console is one example. Sony sold over 2 million Vita consoles. The Vita featured a 5" touch Samsung-Made OLED display (960x544), but Sony switched to an LCD in the newer Vita as they wanted to reduce the cost of the device.

In January 2009, Sony unveiled their 'X' series OLED walkman. They claimed it was the best sounding walkman ever, and it's got the best display, too: a 3-inch 432x240 touch AMOLED. Sony has also used a large AMOLED in their NW-A840 walkman.

Sony's main product line is now smartphones - but the company has yet to release an OLED smartphone.

Sony are also producing OLED microdisplays, and have several such displays on the market, including a 0.5" XGA (1024x768) panel for digital camera EVFs and a 0.7" 1280x720 microdisplay used in Sony's HMD products.

Esteemed US-based A/V retailer Value Electronics conducted its latest annual TV shootout, with very interesting results. It is not a big surprise, but OLED TV won the first places in both the 4K and 8K shootout.

Today we published a new edition of our OLED and MicroLED Microdisplays Market Report, with all the latest information. The new edition includes more than 10 new updates, new companies, new datasheets and revamped sections on APS, Mojo vision, Porotech, PlayNitride and more. 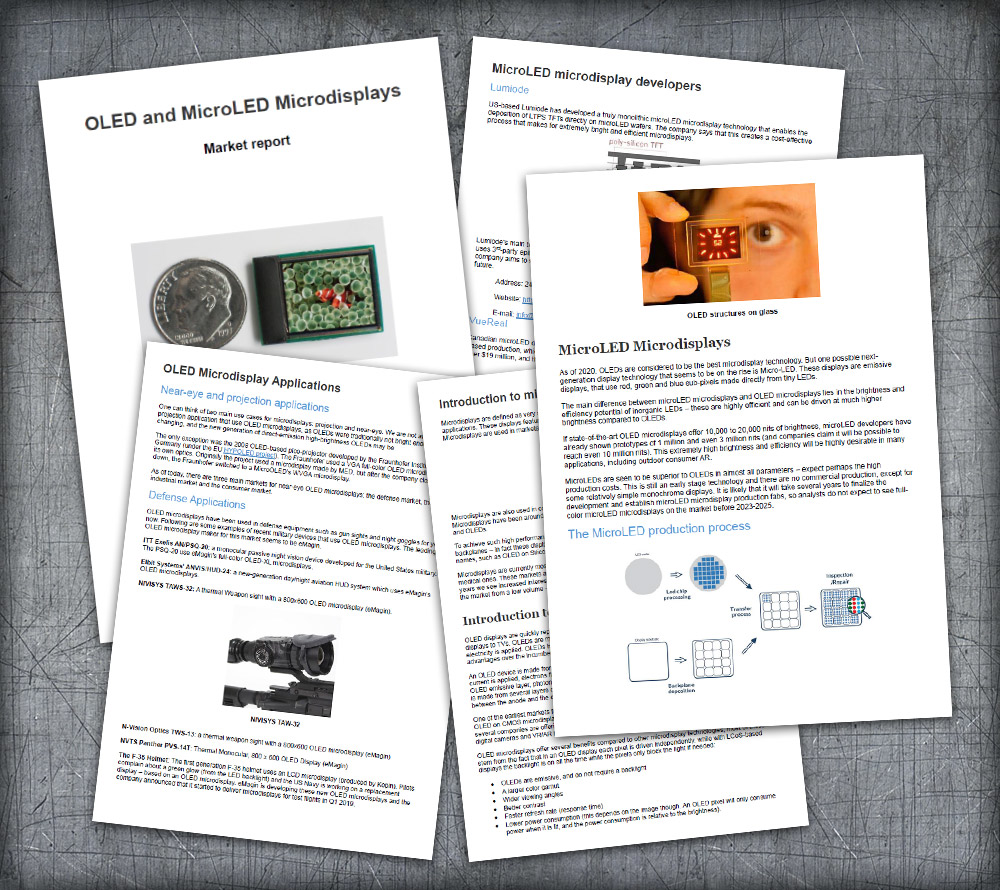 Reading this report, you'll learn all about:

This microdisplays market report provides a great introduction to OLED and MicroLED microdisplays, and covers everything you need to know about the current status of the market and industry. This is a great guide if you're considering to adopt OLED microdisplays in your product, if you're looking to learn more about next-generation micro-LEDs and if you want to understand this industry better. 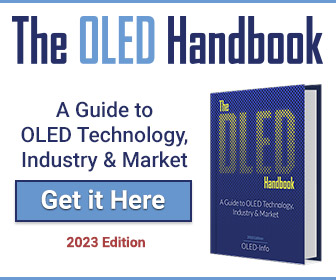 2022 OLED KOREA CONFERENCE will be held at Shilla Stay in Busan from April 6-8. From smartphones business, Samsung Display is expanding into IT OLED business to products such as notebooks and tablet PCs. Samsung Display Vice President, Yongsuk Choi will kick off the conference with the theme, “OLED Innovation for Post-Pandemic Era” in his keynote.

Hyeon Woo Lee, Senior Vice President of LG Display will deliver the keynote on the ever-evolving large OLED for TVs and OLED.EX. Commonly know for growth in smartphone-oriented mobile products, the OLED market achieved impressive growth in the TV and IT markets in 2021. Choong Hoon Yi of UBI Research will give an overview of OLED performance in 2021 and market forecasts by application products. He will discuss investment prospects and business direction of panel makers and detail China’s rapidly growing OLED investment and business analysis.

Earlier this year Sony announced the world's first QD-OLED TV, the A95K. The TV is not shipping yet, but the first reviews are in - and the ones we have seen say that the display quality of Sony's new TV (and Samsung's new OLED panels) is superb.

A reporter from DigitalTrends, Caleb Denison, for example, spent some hours in front of an A95K, and says that the display is bright (the brightest he has seen in a consumer TV) and it offers the most accurate colors he ever saw. The colors are pure and "better than any OLED, and most QLED TVs, too".

Towards the end of 2021 we reported that Apple plans to launch its first AR headset in Q4 2022, powered by dual 4K OLED microdisplays, produced by Sony

According to Ross Young from DSSC, Apple first headset will actually be a VR headset, that uses a foveated display system. The headset will feature three displays - two 4K microLEDs (indeed produced by Sony) and one larger AMOLED display.

During Sony's Technology Day, the company unveiled a new VR headset prototype based on a new 4K OLED microdisplay panel, which was unveiled for the first time.

Sony reports that the new microdisplay features very low latency, with a response time of <0.01 seconds. The prototype display utilizes a white OLED with color-filters architecture.

Report: Apple to release its first AR headset next year, based on 4K Sony OLED microdisplays

Apple analyst Ming-chi Kuo says that Apple plans to launch its first AR headset in Q4 2022, powered by dual 4K OLED microdisplays, produced by Sony. The headset will feature Mac-level computer power and will not require a tethered smartphone to operate.

Apple has been working on AR technologies for many years. Last year it was indeed reported in Japan that Apple is working with Sony on its microdisplays. Earlier this year it was reported that Apple has teamed up with TSMC for microdisplay production - but it could be that TSMC will be the manufacturing partner, while Sony will provide the OLED technology and knowhow.

In 2016 Sony launched its successful Sony Playstation VR Headset, with its 5.7" FHD (1920x1080) AMOLED display. The company is getting ready to release an updated version, and during its latest developer summit, it revealed some initial details.

The new VR headset will feature OLED displays, with higher resolutions - there will be dual 2000x2040 displays. The field of view is also improved to 110-degress (up from 100 degrees in the original PSVR).

In 2019 Samsung Display formally announced its decision to invest $10.85 billion in QD-OLED TV R&D and production lines. It was reported before that SDC is started to produce panel prototypes, and is on track to start mass production in Q3 2021.

According to a new report from Korea, SDC is set to begin producing full module prototypes in June this year. In addition SDC had to increase the brightness of its panels as TV makers said it is not enough for premium TV adoption. SDC will produce both TV and monitor prototypes, which it will send to potential customers (such as Samsung Electronics, Sony, and Chinese TV makers). When customers approve the prototypes, SDC will be ready for commercial production.