Novaled is one of the most interesting OLED companies these days as it is getting ready for an IPO soon. 2011 was a good year for Novaled, with â¬17.4 in revenues and a profit of â¬1.2 million. The company is offering OLED technology licensing, consulting services and OLED materials. Samsung and LG Display for example, are using Novaled's materials, and someone once told us "everybody uses Novaled's materials".


Unfortunately, getting ready for an IPO also means that the company is currently unavailable to reveal new information... I visited Novaled's booth at SID, and indeed they couldn't tell me any news regarding the company, even ones that were revealed in the company's SEC filing. They did however exhibit several nice OLED lighting protoypes and products.

First up was a suitcase with several OLED lighting panels, including transparent ones and OLEDs made on metal foil.


Novaled also showed the Liternity Victory lamp. This premium limited-edition desk lamp uses four rectangle OLED panels and has a carbon-fabric base. It costs around â¬4,500... not cheap.

Finally, Novaled also had a wall-mounted OLED lamp with 16 small square color-tunable panels. It looks pretty good, although I'm afraid the video and photos I took did not do it justice.

Just before SID Novaled announced that it has developed a new class of n-doped electron transport layer (ETL) materials, suitable for both OLED TV and small mobile display applications. Novaled says that the new materials can feature as much as double the lifetime compared to their previous materials.

That's it. Nothing exciting to tell from Novaled, hopefully we'll hear more after the company's IPO.

Disclosure: Novaled is a long-time sponsor of OLED-Info 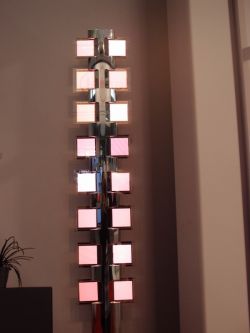 Huawei and LGD to sign a long-term flexible OLED supply agreement
IDTechEx: the OLED market will reach $25.5 billion in sales in 2018
Apple launches the iPhone 13 smartphone family and the Watch Series 7, all with AMOLED displays
Reports suggest that Meta is in talks with Samsung and LG regarding the supply of OLED and microLED microdisplays
Universal Display is developing TADF emitter and host materials
Loading content ...
Loading content ...