A few weeks ago, LG Electronics in Israel were kind enough to send me a 55" curved OLED TV (the EA9800, or the 55EA970Y as it is called in Israel) for a review on OLED-Info. So first of all - thanks guys, that was very cool of you! 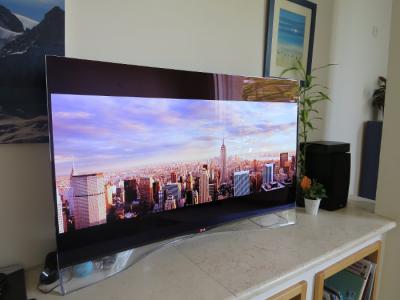 LG released this OLED TV back in August 2013. It's been reviewed repeatedly since, with one apparent conclusion: that this TV offers the best image quality ever! So to get it out of the way - yes, It really does! The TV, even to my non-professional eyes, offers a superb viewing experience. LG now offers even newer TVs (the 55’’ curved FHD 55EC9300 and the 65’’ 4K curved 65EC9700) that can supply a superior image quality, but sadly haven't yet arrived in Israel.

I decided not to post a regular review, as I said there are lot's lots of those around already. Instead I'll tell you my experience with the TV, and the remarks of those lucky friends of mine who came to check it out.

First, let's go over the technical specs. This is a 55" curved OLED TV, that uses LG's Oxide-TFT WRGB Full-HD OLED panel. It features an "infinite" contrast, passive 3D, LG's Smart TV platform and a Carbon Fiber-Reinforced Plastic (CFRP) back. As I said this is the 2013 model, which is already replaced in most countries by the newer 55EC9300 (which uses a very similar OLED panel).

The first thing you notice about this TV is how thin it is. The TV itself is about 4 mm thick - but sadly some of it is thicker - in the place that holds all the inputs and connections. But it is still a marvel and everybody who saw this it was very impressed. It's a striking TV and if you like to impress your friends - this TV is for you.

My own TV is a 4-years old 40" Philips LED-backlit LCD (we do not watch a lot of TV in my family...). So when I first viewed the new LG OLED, it sure was breathtaking - the colors are great, the blacks are really blacks and of course it's a lot bigger than my own set.

To be honest, while the image quality was excellent, it was not "amazing". I think most visitors who watched it said the image was very good, probably the best they have seen, but they were not blown away. LCD TVs are constantly improving in image quality and the difference from OLEDs is noticeable but not very large.

My only complaint regarding the image quality was the reflective coating. This TV, especially when off, is almost like a mirror and it was sometimes bothering. It was less noticeable when the TV was on, though.

Ok, this is not OLED related, but for me, one interesting feature of this new TV for me was the smart platform. LG's newer TVs in 2014 use the company's WebOS platform, but even this previous generation smart TV was still pretty neat - especially the 3D remote (which my daughters liked too). Searching or entering text is extremely slow and annoying, though. 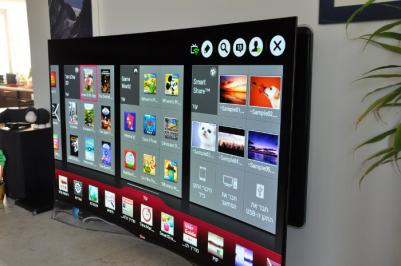 It took Abigail (my elder girl, 6 years old) only a few minutes to learn how to use the Smart OS, and she managed to install new games and play them on her own (even though some of the text was in Korean). The only thing that all kids complained about is that the TV is not touch enabled...

TV makers are now pushing curved TVs, as they say this provides a superior image and lowers reflections. I have mixed feelings about the curvature. While I still think a flat TV is more practical and beautiful (you can mount it on the wall and it looks better. of course, you can mount the curved TV, but it won't be flat), I must admit that the effect of the curve was actually very nice and made for a very beautiful screen. The curved image didn't bother me at all, even if I did not sit in the sweet spot. In fact I tried sitting to the side of the TV and the images still looked great. In some scenes that feature convergent lines, the curve creates a gentle 3D effect which is very nice and immersive. 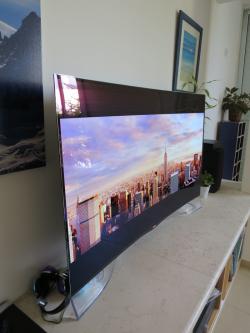 When it comes to 3D, this TV features passive 3D (FPR) and comes bundled with 2 glasses and two clip-on glasses. We watched a few 3D clips (which you can download from LG's smart-TV platform) and it was nice, but I'm not very keen on 3D myself really, so I wasn't excited. The 3D surfing show from LG's library was cool though!

One unpleasant discovery was that LG's OLED TV heats up. OLEDs can be very power efficient, so you'd assume the TV will dissipate very little heat. But it isn't so, and you can really feel the panel heating up. Maybe this is due to LG's color-filter architecture (WRGB), or maybe due to the OLED materials which are not as efficient as theoretically possible.

What do the people say?

Most people, when they first saw the TV, were very impressed with how it looks and how thin it is. As I said, they commented that the image quality was good but not breathtaking.

I like to see how kids react to new gadgets. They are always honest and it's great. My two daughters loved the TV. I think that was mostly due to the fact that you can play games, and to the fact that they knew this was a unique TV and that we're "reviewing it". A few days after we got it, Abigail asked me to call LG and ask if they can leave it at in our home for good...

When we sat down to see a movie (Monsters Inc) on the TV, it was really an a nice experience and both my daughters enjoyed it a lot - and so did I.

Other kids who came to see the TV loved it too. One of Abigail’s friends told her mother later that "Abigail has a new TV, it's so thin it is like a sheet of paper - but it emits light! it is so cool". Several of them said they want one at home...

Is it worth it? 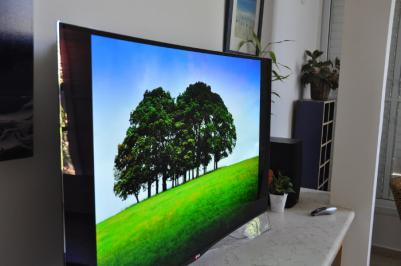 I always like to say that having a better TV doesn't really enhance your viewing experience. But having this TV for two weeks at home was fantastic and I found myself actually enjoying it very much. Of course going back to the 40" LED LCD was quite depressing, as it looked small and pale in comparison.

Thanks again, LG folk, for this great TV. Next time, it'll be great if you can leave it here for good :-)

I have never experianced any heat comming from the OLED panel itself, but from the CPU inside the panel have hot at times on my EA970W(euro version)

And dare I say, it's wonderful to use, it was expernsive to say the least, but worth every penny (or danish crowns i my case)

Actually the model number in Israel is "55EA970Y". You may be right, I wasn't aware of the spaker difference, and there were no speakers in the plastic below this TV...

could you please post a picture of gray 64 flat field from your panel? specially after CPU warm up? I like to see them both side by side to see the effect of using the panel for a while on its uniformity

I no longer have the TV, so I can't take any more pictures...

you didn`t see much of the difference in the picture quality because you are Not a videophile .

Maybe you are right - but this is exactly the problem as most people are not videophiles and will not really see a huge advantage in picture quality when moving from LCD to OLEDs. It'll still be a better quality picture, and OLED has many other advantages, of course.

actually it doesn't have any advantage in comparison with some best lcd tvs... espeically those only sold in japan

The current LG OLED's just released 65" and soon to be released 77" have crappy motion.   The picture is great but the motion sucks.   Frankly if you want to display stationary artwork on the TV - the OLED is great but for movies and sports it is worthless.

Having CRT response times brings lots of meaningful improvements that LCD`s and their response time measures in miliseconds lack... like NO GHOSTING.

Not to mention you can finally have IPS or better quality panel with refreshes of 120hz, and actually much higher.

LCD is pure sh1t compared to OLED... but you have to know what you are talking about to realize that.

I bought the 55" 2nd generation LG OLED - the most insane contrast and black levels ive seen but i returned the TV . IMHO what LG needs to do to anihilate the competition is : allow us the option of diabling LG's DNR, give us panels with decent colour uniformity, have superior video processing such as Sony , panny or  what pioneer did. Get rid of the curve. If they gave me this i would have paid 5,000 for it . But at 3500 you can see theyve cut corners .Its not for videophiles just yet . I just hope LG doesnt do what theyve done since inception : target the mums and dads market of best buy