Samsung launched the Galaxy Note Edge back in September 2014 - the company's first mass market flexible OLED phone. The Nice guys at Samsung Israel sent us a review unit a few weeks ago - and here's our hands-on review. 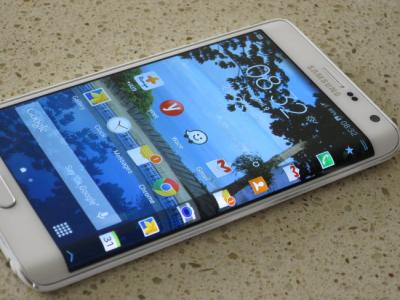 As always this is not a full phone review - we leave those to the experts and for people that actually love mobile phones. We will focus on the display - and our experiences of having this device for a few days. The first part is written by Ron, and then Roni will give her own views.

So first of all - the display. The Note Edge has a flexible Super AMOLED display that curves around the right edge. The "main" display is a 5.6" QHD (2560x1440 524 PPI), and the right-stripe on the edge adds 160 rows that display icons or notifications. One thing is certain - this is an absolutely stunning display. The colors are great, and it's extremely sharp. No wonder DisplayMate said this is the best mobile phone display ever (until the GS6 was released, at least). 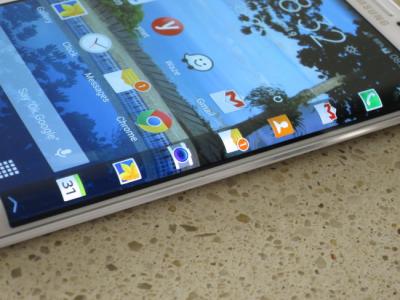 The most striking feature of the Note Edge is, of course, the Edge. The flexible OLED is curved around the right edge of the phone, and it's a very nice effect. People notice it right away - and yes, this is a great way to get some attention from waitresses. Most people that saw it said it was very cool and were excited - and rather surprised to see it actually works when you touch it, the curved display is unique (but I guess the novelty will quickly wear off once more flexible OLED devices hit the market).

The Edge display can be used to show notifications (which is rather nice), shortcut to applications - and simply show a nice image or animation. It is also used in some applications (for example in camera mode, the Edge strip is used to the camera controls). It's actually quite neat, and I have to say that after two weeks of using this phone, I still enjoyed pressing on the curved application shortcuts. I guess you can say it saves some screen space (due to the curve) - but it's not really useful. It's fun and beautiful, that's for sure.

It is interesting to note (ha!) that the curved edge is much more pronounced in the Note Edge than in the GS6 Edge (which, on the other hand, is curved on both edges). As you can see in the image below, the curved part of the display in the GS6E is much smaller, and has much more limited functionality. 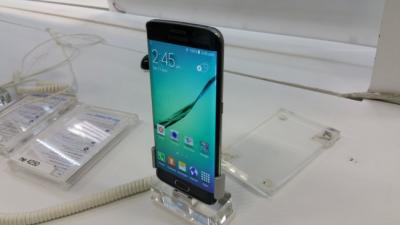 The Note Edge itself is quite a nice phone. I thought it'll be too large for me (my own phone is a GS4) - but you get used to the large display quite quickly, and it still fits in my pocket. I really liked the stylus (even though I didn't use it a lot). I was a bit disappointed to find the phone a bit sluggish - it seems that my GS4 actually performs better. Altogether though I would have been very happy to keep it...

Roni: I'd like to start by pointing out that the Note Edge's name is somewhat confusing I expected an 'edge' of some sort, a sharp or pointy part. When I first looked at it, what I saw was entirely curved, rounded and edge­free. In any case, I found it to be beautifully designed and very attractive. Since my personal phone is an iPhone 5S, I had great doubts about learning to like the Note Edge.

Imagine my surprise when I not only liked it, but secretly plotted to not give it back to Samsung...

So, yes. The device is beautiful and sleek, and even felt good in my hand despite its rather large proportions. Surely there will be those who will regard the curved part of the screen as a gimmick, a novelty that is destined to wear off, but I have to argue differently; I think it's something that one could get used to, a feature that carries with it a real (albeit not vital) revolution. Why? Because it carries the power to eliminate the much­ hated notification line that appears on top of whatever it is you're looking at in the 'front' screen. Upon downloading or updating an application, getting a missed call alert or whatever else you can conjure, the notification appears on the curved part and does not interfere or block what's happening in the front screen. It doesn't sound like much, but anyone who has ever played a game on the phone and was interrupted by endless notifications would undoubtedly relate. The curved screen is also extremely customizeable so one could choose what to put there (icon, tools and more) to maximize convenience. The curve even displays a ruler, which I think is very useful. What more could you ask for?

I conclude this review by saying that Samsung, in my opinion, created a wonderful device that really offers something new. It is sleek, beautiful, different than others on the market and the edge really adds to the experience. The device is ambitious and much could go awry, but they did a good job at Samsung and it seems to work very well. To this day I swipe the side of my iPhone, hoping it responds.

The Note Edge is now shipping globally (yes, in Israel, too), and it costs about $100 more than the Note 4 - you can buy it unlocked in the US for about $744, or with a plan at all major carriers.