One of the first companies I wanted to visit at SID was eMagin. I met the company's CEO (Andrew G. Sculley) for the first time, and he gave me a very nice introduction to the company's current business and future plans. I'll try and summarize that meeting and eMagin's booth in this post.

eMagin is now in the final testing and qualification stages of its new deposition and seal machines. Those new machines are expected to increase capacity and improve yields. It will also free up the current machines for R&D, which seems to be very important for Andrew. 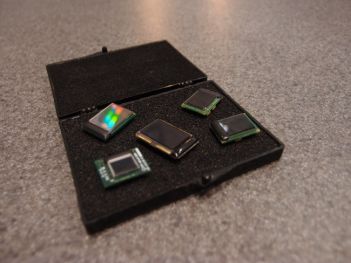 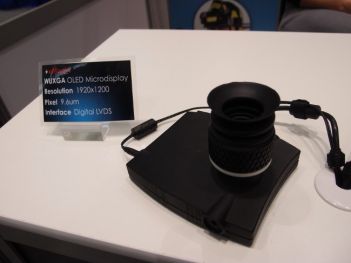 They are already shipping OLED microdisplays to a professional cinema camera. This might be the new Bomb OLED EVF by RED, although Andrew wouldn't confirm that. eMagin has also got a design win into a consumer DSLR, which will hopefully start shipping in 2012 before the X-Mas season. This could be a large market in tens of thousands of units if the camera is successful, but at a much lower price than eMagin's current contracts. eMagin wouldn't say who's the camera maker, although they do say that Sony is using their own, and from what I understand it ain't Canon nor Nikon. So it's probably Panasonic, Samsung, Olympus or Pentax (am I missing some other SLR maker here)?

eMagin's current design uses white OLEDs with color filters (WOLED-CF). In fact all OLED microdislpays on the market use that architecture. eMagin are now working towards a direct-emission (or Side-By-Side, SBS) design which will be more efficient and will enable even more high-density displays. This will enable them to tap more markets (apparently there's a client that the current microdisplay specification is not enough for and this requires SBS).

eMagin's booth was rather small, showing a couple of OLED microdisplays, including the upcoming WUXGA (1920x1200) one, and it looked good. The company was also showing two HMDs one with a the WUXGA display and another with a SXGA (1280x1024) one. 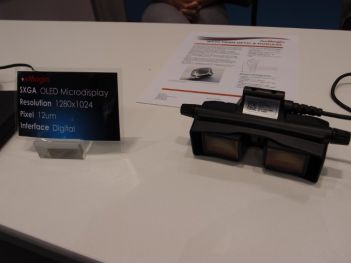 I walked away from eMagin's booth quite happy. I own some eMagin shares, and I hope that the company has a bright future. Like I said, this was the first time I met with the company's CEO (Andrew) and he made a good impression on me personally...

Thanks for this article.  Emagin is on the verge of some good opportunities.  Would you explain why you mention "what I understand it ain't Canon nor Nikon".  Tens of thousands not enough for these larger players?

This is something I heard from someone at SID, but couldn't really verify it officially with eMagin...