Two major display technologies are used today to create high-end premium TVs, OLEDs and QLEDs. This article aims to compare these two technologies and detail the market status of both the premium TV market.

While OLED is a next-generation display technology that uses organic materials that emit light when electricity is applied, QLED TVs are still LED-backlit LCD TVs, but ones enhanced with quantum-dots materials. QLED TVs also called QDLED (or QD-LED) TVs and QD TVs. Reviews of OLED TVs are terrific, and most experts and consumers agree that these OLED TVs are the best TVs ever produced - with virtually perfect image quality and beautiful form factors. 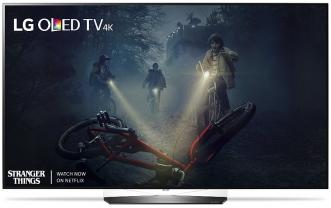 An OLED TV vs an QLED TV

An OLED (Organic Light Emitting Diodes) panel is made from organic (carbon-based) materials that emit light when electricity is applied. An OLED TV is made from millions of pixels, each made from red, green and blue tiny OLED materials. Or at least that's the theory, all current OLED TV panels are made by LG which is using a slightly different architecture - white OLED pixels with color filters on top.

A QLED TV is a confusing term - as it should actually be called LED-backlit LCD enhanced with Quantum Dots (QD) materials. This is still LCD technology, which uses LEDs as the backlight source (instead of the fluorescent tubes used in older LCDs) and liquid crystals and color filters to control and modulate the light. In regular LCDs the backlight is white - but in QLEDs the backlight emits blue light which is converted to white by the quantum dots coating.

OLED displays have the following advantages over LCD displays:

OLED technology is not perfect, though, and QLED TVs have some advantages as well:

What about emissive quantum dots TVs?

Current QLED TVs use the photo-luminescence qualities of quantum dots - the fact that they can absorb light at a certain wavelength and emit a light at a different wavelength (specifically convert blue light to white). In a similar fashion to OLED materials, QDs also feature electro-luminescence, which means that light is emitted when electricity is applied.

This means that in the future QDs could be used to create true emissive displays, one that do not require color filters and liquid crystal to module the light. These kinds of displays are already in development and the hope is that true QD-LED TVs will feature the image quality of OLED displays but at an even higher efficiency.

Samsung has been developing a hybrid QD-OLED TV technology, that adopts blue OLED emitters and quantum-dots that convert the blue light to red and green light. Samsung plans to convert its L8-1 8.5-Gen LCD fab to QD-OLED production.