This is a guest post by Dr. Guillaume Chansin, founder and principal consultant at Irimitech Consulting

New sensor technologies are being developed specifically for the integration of fingerprint scanning functionalities with OLED displays. The recent announcements indicate that the industry is moving away from capacitive sensors to focus their efforts on optical or ultrasonic detection. For display manufacturers, this could even present opportunities to innovate and offer their own solutions.

Once a premium feature, fingerprint sensors have become almost standard on smartphones. However, the latest design trend is to remove the bezels around the display, leaving no room for the fingerprint sensor. Some OEMs made the choice to move the sensor to the back of the device, which is not always convenient (for instance when mounted on a car dash).

The more ambitious option is to integrate the fingerprint sensor with the display. For the iPhone X, Apple considered this option but decided in the end to rely only on their new FaceID technology which uses an infrared camera for face recognition. The exact reasons are unclear, but it is safe to say that introducing a fingerprint sensor would have pushed the manufacturing cost of the phone even higher. It is also possible that the technology was simply not up to the standard of Apple at the time.

The industry is progressing fast however. At CES this year, Vivo introduced the first smartphone with an under-display fingerprint scanner. The sensor inside is the new Clear ID FS9500 by Synaptics. What makes it so different? It is an optical sensor.

Although Synaptics had built a strong expertise in capacitive sensors, they had to switch to an optical system for the FS9500. You can think of it like the image sensor inside a camera but without a lens. Conventional capacitive fingerprint sensors are difficult to integrate with a display because the distance between the sensor and the finger must be very short (300 microns). With optical sensing, it is possible for the sensor to be further away from the surface and still produce a high resolution scan.

There is however another challenge: an optical sensor is not transparent so it has to sit behind the display. This solution does not work well with LCD panels which are transmissive displays with a backlight. Fortunately, many new smartphones now use OLED displays instead of LCD, making it much easier to integrate an optical fingerprint sensor. With OLED, the display is used as the illumination light and the sensor captures the reflected light that travels back through the display. According to the presentations from Synaptics the distance between the finger and the optical sensor can be as high as 1.5 mm. This is well within the thickness range of an OLED panel with a standard cover glass.

Image sensors like the one used by Synaptics are usually made with CMOS technology. CMOS sensors can achieve resolutions over 2,000 dpi and can be mass produced in existing semiconductor foundries. Synaptics is not the only one taking advantage of this mature industry. For example, Vkansee is another company that has developed a CMOS optical sensor for fingerprint scanning. However, large CMOS sensors are expensive and the cost increase exponentially when scaling up to even larger sensing areas. In other words, it is not an economically viable option to turn the whole display into a fingerprint scanner. You are more likely to get a scanning area the same size of a small button.

For the display industry, there is an opportunity to offer an alternative to CMOS sensors. Some companies are now trying to leverage their expertise in manufacturing thin-film transistors (TFT) to make their own fingerprint sensors. For example, Japan Display Inc. (JDI) are now developing a sensor on glass that is based on the same polysilicon TFTs used in their LCD panels. The sensor is capacitive so is not designed to be placed behind a display. Since TFTs are used to make the active matrix in LCD or OLED displays they are ideal for making large sensor arrays.

The most interesting new development was shown by BOE at the Display Week exhibition this year. The Chinese manufacturer demonstrated the first under-display fingerprint sensor made in-house with TFTs. The optical sensor had a resolution of 500 dpi and was placed directly under an OLED display. They said they could make the sensor on conventional glass substrates or on plastic to match the sensor with flexible OLED displays.

BOE was also showing another prototype featuring an 800 dpi CMOS fingerprint scanner manufactured by Vkansee. This clearly demonstrated the strengths of each approach: higher imaging resolution with CMOS, larger sensing area with TFT. Although the sensor in the TFT demo was smaller than the display, it will be possible in the future to make larger ones to cover the whole. BOE also said they use new materials which will make it cheaper to scale up. 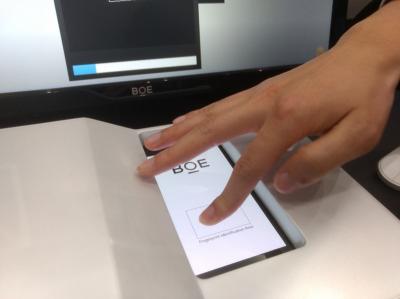 Making fingerprint sensors with TFT is not completely new. Already back in 2016, FlexEnable and Isorg demonstrated a flexible fingerprint and vein sensors with an 86 Ã 86 mm active area. The device combined FlexEnable’s organic TFT backplane with Isorg’s organic photodetector. Since then, they have been able to achieve a resolution of 500 dpi, which is the level usually required for secure biometric applications. It would be fascinating to see this sensor integrated with an OLED display, as it would result in a Trinity of organic electronics (OLED, OTFT, OPD) combined into a single device.

The Holst Centre has also been developing organic photodetector arrays, but they used metal-oxide TFT for the backplane. The prototype they demonstrated at Display Week is relatively large (60 Ã 80 mm) but can only produce images at 200 dpi [update: they also made a smaller sensor with a 500 dpi resolution]. The Holst Centre says the technology will be transferred to industry for commercialisation.

Is optical detection going to be the dominant technology for fingerprint sensors? It seems that most of the industry is betting on it. However, one big player wants to offer an alternative. Qualcomm has been developing an ultrasonic sensor for several years and the company says it can also be placed behind a display. There are limitations though. Unlike optical sensors, ultrasonic sensors do not see through air gaps, so they will be better suited for flexible OLED displays that are bonded to the front glass of the device.

The rapid adoption of OLED displays in smartphones has enabled new possibilities. First it was the transition to flexible displays and now the integration of fingerprint sensors. It is going to be a very exciting time for the sensor and display community and I believe we are going to see a lot of innovations in the coming years.

Dr Guillaume Chansin is the founder and principal consultant at Irimitech Consulting. He has been following emerging materials and devices since 2012 and has been a speaker at major industry events on flexible electronics, displays, and sensors.