OLED devices, made from organic materials that emit light when currency is applied, enable thin, flexible and efficient displays and lighting devices.

Kodak actually invented OLED technology, and In December 2009, the company announced that they have sold all of their OLED business to LG. LG paid $100 million for the OLED unit. Kodak still has access to the technology for their own products.

Kodak - where it all started

In the early 1980s, Kodak invented OLED technology, and following years of development, licensed the technology to around 20 companies, including LG, CMEL and others. Back in 2008, we interviewed Mr. Corey Hewitt, Operations Manager & Vice President, Kodak OLED Systems.

Back in 2003, Kodak released the first product ever with an AMOLED display, the EasyShare LS633 digital camera. That camera had a 2.2" AMOLED display with a resolution of 512 x 218. 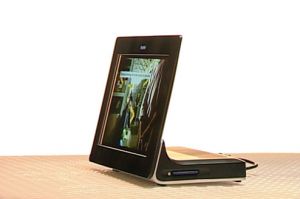 In addition to OLED displays, Kodak was also active with an OLED lighting research program. . Back in 2008, we We talked to Mr. Steven Van Slyke (R&D directory) and Dr. Yuan-Sheng Tyan, a Research Fellow from Kodak's OLED systems.