OLED is short for Organic Light Emitting Diode, a device composed of thin carbon-based films placed between two electrodes that creates light with the application of electricity. Unlike other screen technologies, (like LCDs), which require backlighting, OLED displays are emissive devices - they emit light rather than manipulate transmitted external light.

OLED displays are already very common on mobile phones (in fact about a quarter of all mobile phones now ship with an OLED - and that percentage is climbing as Apple, Samsung, LG, Huawei and others adopt OLED displays in their best smartphones).

OLEDs are just now starting to make inroads into the tablet market, though - as these larger displays carry a high premium over competing LCDs. The leading company that produces and adopts OLEDs is Samsung, and indeed the company's latest high-end tablets all use OLED displays.

Smartphone remained the leading OLED application, with a 79% revenue share, even though shipments decreased 8% (and revenues decreased 3%). The second largest application by shipments is wearables (16% in Q1 2022 by shipments and in 6% market share by revenues).

BOE aims to develop tandem OLED displays for Honor smartphones, and hopefully to Apple iPads in the future

According to a report from Korea, BOE is in talks with China-based smartphone producer Honor regarding the supply of tandem (dual-stack) OLED displays to be used in Honor's smartphones.

BOE hopes that its tandem OLED panels will reduce power consumption by around 30% compared to a single-stack OLED display, which will enable Honor to adopt a smaller battery and a thinner design. Both companies hopes to be able to introduce the panels and the smartphones that use it by the end of 2022. 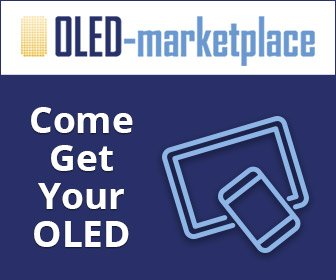 Back in 2020 we reported that Apple is worried about lifetime and burn-in issues in AMOLED displays in tablet applications, and Apple decided to adopt a tandem OLED architecture in the displays it will eventually adopt in future iPad devices.

LG Display already developed such panels for automotive applications, and according to reports it is developing a tandem LTPO AMOLED display for Apple, aiming to supply these to Apple at around 2024. According to a new report, Samsung Display has launched a project to develop tandem OLED panels as it also hopes to supply panels for Apple's future iPads.

DSCC: the foldable OLED market will grow to 86 million units by 2026

DSCC: there are 11 8.5-Gen IT OLED production lines under development

Demand for larger mobile OLED displays, for laptops, tablets and monitors is on the rise, and OLED makers (Led by Samsung Display) are planning to establish 8.5-Gen OLED production fabs dedicated for IT panels. The leading maker is

DSCC posted a very interesting article with predictions on this new development in the industry, saying that there are currently 11 different 15K G8.5/G8.6 IT OLED lines under development.

Last week Samsung launched its flagship tablets for 2022, the S8 series, which include two versions with AMOLED displays. It seems as if demand for the S8 (LCD) and S8 Ultra (Super AMOLED) is very high, and Samsung has halted the pre-orders for both tablets. You can still pre-order the Galaxy Tab S8+.

Samsung launched a new range of mobile devices, most of which feature AMOLED displays. The new smartphone range starts with the Galaxy S22 which sports a 6.1" 120Hz 1300 nits 1080x2340 Dynamic AMOLED 2X, and the Galaxy S22+ which offers similar specifications but with a larger 6.6" AMOLED which is also brighter at 1,750 nits.

DSCC has released its latest OLED market forecast, and the company forecasts a 8% CAGR revenue growth, with the market reaching $64 billion in revenue in 2026. The growth will be fueled by high demand for laptop, monitor and tablet displays. The smartphone and OLED TV market will also continue to grow.

DSCC: miniLED IT panels are more expensive to produce than tandem OLED panels

DSCC posted an interesting article, comparing the production costs of OLED vs mini-LED panels for IT. DSCC estimates that for tablets and notebooks, a tandem structure will be used, and the panels will be based on rigid substrates.

In the chart above you see a production cost comparison, between 2021 and 2025, for 12.9" panels. DSCC looks at two OLED production options: a tandem OLED panel with an LTPO backplane produced in a 6-Gen fab, and a similar panel that uses an Oxide-TFT backplane and produced in a larger 8.5-Gen fab. As you can see, OLED panels are more cost effective, and will remain so throughout the forecast period.

Most of the growth in the next 5 years, according to DSCC, will come from new IT applications: OLED displays for monitors, laptops and tablets.