Is TADF the future of efficient OLED emitters?

This is a premium OLED-Info article

TADF, or Thermally Activated Delayed Fluorescence, represents a class of OLED emitter materials that aim to provide efficient and long-lifetime performance. TADF research started in earnest in 2012, and some believe that TADF represent an exciting new platform for next-gen OLED emitters. 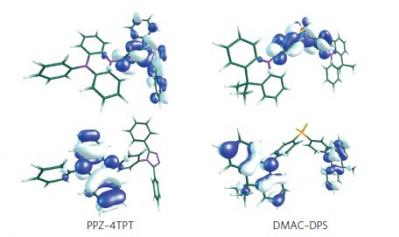 When OLEDs were first developed, the materials were classified as fluorescent materials. These materials provided an easy path to long lifetime performance. The efficiency of fluorescent materials is low, though - only about 25% of the electrical energy (or IQE, Internal Quantum Efficiency) used is converted into light (the rest goes to heat). Commercial fluorescent red, green and blue emitters were developed - and used in the first OLED devices made.

There are several disadvantages to phosphorescent emitters, though: the heavy metal is expensive and not environmentally friendly (although the amount used is quite negligible), the lifetime of a dark-blue emitter is lower than in fluorescent emitters. The basic phosphorescence OLED IP is owned by Universal Display (UDC), which is causing some concern in OLED producers which would have preferred a more competitive market.

Following intensive research and development, UDC managed to develop commercial red, green and yellow PHOLED emitters. The company spent years (and still does) developing a commercial blue material, but this is a much more challenging task that hasn't been achieved yet (but UDC is still hopeful it will get there in the future).

Modern AMOLED displays use a combination of fluorescent and PHOLED emitters. Samsung Display uses both red and green PHOLEDs, while LGD uses a red PHOLED in its flexible OLEDs and yellow PHOLEDs in its OLED TVs. It is likely that all AMOLED displays will adopt at least a red PHOLED, and probably a green PHOLED too (as energy boost is quite significant).

The high price of PHOLEDs and the frustratingly slow blue PHOLED advances sparked several R&D efforts. One of these is TADF. TADF is class of OLED emitters materials that manage to achieve 100% IQE (similarly to PHOLEDs) - without any heavy metals. TADF also promise to be quite long-lasting materials and are easily soluble.

TADF research and development is still at an early stage, and as of today there are no commercial TADF materials. It is possible that in a few years, though, TADF materials will be a viable alternative to PHOLED materials. The rate of advance in TADF performance is quite impressive.

TADF research was first pioneered by Kyushu University in Japan, led by Professor Chihaya Adachi. The team developed TADF materials, and presented the findings in 2013. In 2014 the researchers presented efficient blue TADF emitters. In the past few years Adachi's group focused on a second-gen TADF material class, which they term Hyper-Fluorescence materials. 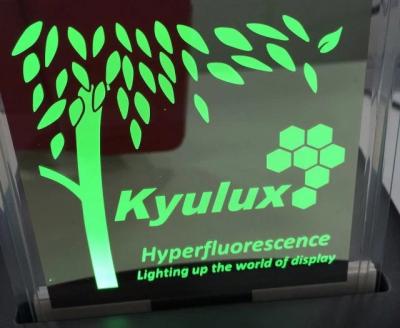 We have met with Kyulux's team at SID 2016, who updated us that the company is progressing fast on the way to commercialize those TADF emitters. The first products to be ready are green and yellow emitters, and Kyulux says that its Hyper-fluorescence TADF emitters offer a superior performance compared to PHOLED emitters (in both intensity and color purity) - and they should also be priced lower - so the company aims to provide a viable alternative to UDC's emitters in the near future. Kyulux is also developing an efficient blue emitter, which hopefully will be ready within a year or so.

Germany-based Cynora started developing TADF emitters several years ago. The company first focused on copper-based emitters, but later on switched to a tight focus on blue TADF emitters. In October 2016 Cynora announced that it developed a new blue-emitting material that combines high efficiency with long lifetime. Cynora's new material offers an external quantum efficiency (EQE, not to be confused with IQE) of 14% and a lifetime of 420 hours (LT80, at 500 cd/m2).

As you can see Cynora's materials are not yet ready for commercialization - but the company says that they are optimistic that they will reach a commercial TADF blue emitter by the end of 2017. The company is also actively looking into TADF emitter printing technologies.

Cynora and Kyulux are not alone in their TADF efforts of course. In January 2016 we posted an interview with Idemitsu Kosan's electronic material's chief, that revealed that the company has been working on TADF emitters for quite some time and holds basic TADF patents. That was the first time Idemitsu discussed TADF, but the company does consider TADF as one of the key OLED technologies on which it intends to focus in the future.

The EU has also recognized the promise of TADF emission, and towards the end of 2015 a new project called Phebe was launched under the Horizon 2020 program, with aims to develop and commercialize TADF OLED emitters. This three-year project's consortium includes Novaled, Astron-FIAMM, TU Dresden, Kaunas University of Technology, Durham University and other companies and universities. The first TADF activity in Europe (and the US) was announced in 2013 by researchers from from the Universities of Bonn, Regensburg, Utah and the MIT.