Sony's OLED program is now focused on medium (7" to 25") OLED panel used in professional monitors. With consumer OLED TV coming from Samsung and LG soon, Sony is also considering entering this market. We had the good chance of talking with Gary Mandle, the product manager of Sony's OLED products for the professional market. Gary has worked within the Sony Professional Solutions Group for more than 26 years in the development and marketing of new display products - including CRT, SXRD (LCOS), LCD, and now OLED products. His current focus is on Sony’s OLED technologies intended for video and film production & post production applications.

Q: Sony is currently offering 7.4", 16.5" and 24.5" professional OLED monitors (TriMaster ELTM) and also OLED monitors for the medical market. Can you update on your current offerings?

A: For professional television and film production, Sony now has seven OLED models. These are offered in three series, each categorized according to performance and features sets to match different applications. Our PVM lineup includes the PVM 740 (7.4 inch), PVM 1741 (17 inch), and the PVM 2541 (25 inch). These are used in areas where you need something that is relatively cost effective and lets you see within the image. These are used in editing, dallies review, graphics generation, and special effects. 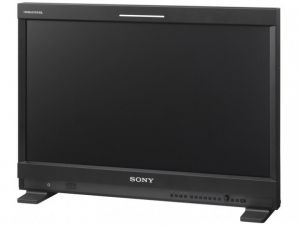 The next step up is our BVM F series. This includes the BVM F170 (17 inch) and BVM F250 (25 inch). These are for technical image evaluation. They are very stable, and the display of the image is based on SMPTE and ITU standards. These are used to find problems in the content, evaluate signal errors, and to QA content once it’s finished. The F series is designed for use with content that will eventually be broadcast or played on consumer media.

Finally, we have our BVM E series which includes the BVM E170 (17 inch) and BVM E250 (25 inch). These are our flagship models and are used for cinematic production. They include wider gamut display and follow the Digital Cinema Initiative recommendations for imaging. Editor: You can see Gary introducing the BVM E series in the video above from March 2011.

Q: What do you like best about OLED technology? And what are the current drawbacks of these monitors?

A: It’s more about how OLED is perfect for our professional customer’s needs. They are in a position where they have to know exactly what they have in terms of image quality. Not knowing can cost them a few hundred dollars for a small independent production and up to hundreds of thousands of dollars for a feature film if they don’t get it right. If the monitor doesn't show you what you have, you can walk away from a shot that took months to setup and not have what you thought you had. So there are a few things that OLED brings to the table. 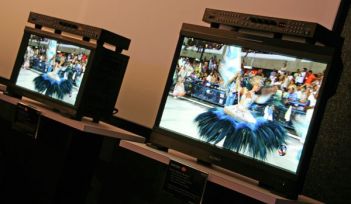 The first thing I always hear from customers is they can now see everything the camera is sending. Black performance and black level resolution is quite amazing with OLED. People are now seeing things in their productions they have never seen before. The next thing would be stability. Previously we supplied CRT monitors for this critical evaluation and people still are trying to hang on to them because they were the reference standard. Now OLED has shown that it can do anything the CRT can (except viewing angle), and in most cases better than CRT.

Also, one really big difference is stability. You can turn on Sony’s Trimaster EL OLED and within 10 minutes, it’s exactly where it should be with image accuracy. In fact we are taking this a step further with a settings copy function in the next software version which allows you to transfer adjustments and configurations to other monitors. From our testing, we've seen amazing accuracy by just sending files to the other monitor with no alignment. What this means is the director can set a look on a monitor and anyone who needs to see the same thing can do so by just taking those settings. So the director sees what special effects sees, what insurance sees, and what the studio sees, and on and on.

The only potential challenge with OLED is size. So far we’ve been able to get this level of performance at 25 inches and smaller. We are working to efficiently manufacture an OLED production monitor at larger sizes and still maintain the accuracy and stability. Sony has new OLED models and panel sizes for professional use currently in development.

Q: One of the major issues with OLEDs is the lifetime. Can you share with us the quoted lifetime of the TriMaster OLEDs?

A: According to our tests, the Trimaster panel lifetime is around 30,000 hours (Actual performance varies based on setting, environmental conditions and usage). When compared to our CRT models, that’s about a 30% longer life than we got from a tube. We’re very proud of this and we’re doing a number of unique things in the monitor design to achieve this, such as enhancing the design of the top emission panel architecture. To support this claim, we’ve put a 3 year warranty on the BVM series and a 2 year warranty on the PVM series.

Q: Can you share the market reaction to those monitors? What are customers saying, and where are they using these monitors?

A: Customer reaction has been overwhelmingly positive. Since we introduced our E Series last February, we have been at full manufacturing capacity.

Using our OLED technology, productions can help save money since making fewer mistakes require less post production time. Several customers that are used to calibrating their displays each day have commented that now they just check them and have never had to adjust them. That’s a first. Many of the creative people who use them have commented that they like working with a monitor that can show them everything in the image. It gives them confidence in what they’re doing and they tend to work faster. The producers love that.

Prior to this, many movie productions would only review what they were doing with a projector. They still will use a projector, but now there are times when the monitor will work and they don’t need a theater to do that one task. It makes it much easier to move the production forward when you aren't waiting on a theater schedule.

So, what we’re hearing is OLED technology is helping to save professional production customers money, and deliver an outstanding image.

Q: What is the current price premium for these monitors over equivalent LCD displays?

A: It’s important to define LCD displays versus LCD monitors. In our opinion, a display is a device that makes a picture, such as a TV or a computer monitor. The intent is to be relatively low cost and display an image that is appealing to the viewer.

A monitor is quite different. A monitor must display an image as it relates to a specific display standard. If the monitor is, say set up for an ITU-R BT709 standard, the color primaries must measure to that standard, the white point must be set to D65 (not 6500K), the EOTF must be 2.4 as described in ITU-R BT1886, etc.

If we compare the cost of one of our Trimaster EL models to an LCD monitor intended for the same application, the costs are about equal.

Q: Can you tell us where the OLEDs are manufactured?

A: Initial development started in 1994 and was housed at our Atsugi design center just south of Tokyo. The fab is in Nagoya Japan at Sony Mobile Display, built in 2008. That’s about all I can share about the facility, except that it is constantly working to improve the technology and the production process.

Q: Back in 2007 Sony was the OLED TV pioneer, but now it's clear that Samsung and LG are leading the consumer OLED TV market. Is Sony planning to return to that market?

A: Actually Sony has not left the OLED market. Sony will continue the technical development of OLED to enlarge its display size and enable mass production, and of course Sony also remains committed to OLED for professional use.

Q: Can you give share some more info on the Crystal LED technology?

A: Crystal LED is a very interesting technology and has a number of benefits and potential applications. It was shown at CES as a technology demonstration. Sony will continue to develop both Crystal LED and OLED for potential use in both the consumer and professional markets. 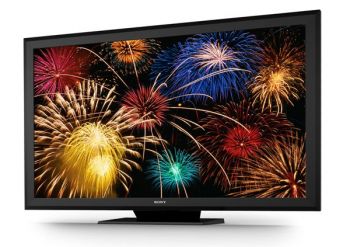 Q: Where do you see the OLED market in 3 and 5 years? What role will Sony make?

A: Since there is so much more investment in LCD, OLED will still be a small part of the market, at least until the pricing is more comparable and there are still too many variables to really tell. But the good news is that it’s delivering and we are certainly part of that!

Thanks Gary for your time, and good luck to both you and Sony!

Oh, and Sony wanted us to make clear that Sony, Trimaster and Trimaster EL are trademarks of Sony, and that the features and specifications of their products are subject to change without notice...