OLED producers have been struggling with the deposition of magnesium materials during the OLED production process. INFICON has developed high-level magnesium-sensitive crystals specifically for OLED deposition, that significantly shorten the initial time delay in magnesium monitoring, while maintaining high stability and reproducibility.

The following application note details INFICON crystals for OLED deposition, the development process, and the experiments the company performed to characterize and evaluate the crystal quality to make sure it offers the highest possible solution for the OLED industry.

Quartz crystal microbalance (QCM) is one of the most important INFICON products for organic light-emitting diode (OLED) and optical device fabrication, as well as for many other applications. The change in the QCM's resonance frequency due to mass loading by thin films allows it to be used as a surrogate for correlating the rate of the film thickness accumulation on a substrate. The design of INFICON High Precision Sensor Crystals was based upon many OLED manufacturersâ€™ requirement of more stable crystals that are less prone to activity dips (instability in the activity signal) in controlling the deposition of OLED materials. The field performances of INFICON High Precision Sensor Crystals have shown to improve rate stability with nearly extinguished activity dips in terms of the number of occurrences as well as the magnitude when they rarely occur. Refer to the â€œHigh Precision Sensor Crystal Line Technical Noteâ€ found using this link.

Although INFICON High Precision Sensor Crystals offer high stability for general deposition monitoring purposes, certain deposition materials do not interact well with the metal electrode on the crystal. Magnesium (Mg), an important cathode material in the OLED manufacturing processes, represents one of these materials. In general, the current industry-standard QCM crystals take a very long time, in the range of tens of minutes to multiple hours, to reflect the true Mg deposition rate in vacuum. The case-by-case delay period differs among various crystal installation configurations in a vacuum chamber and is in general inversely proportional to the Mg deposition rate. It is also noted that the Mg delay is more significant using alloy crystal electrodes than gold crystal electrodes. 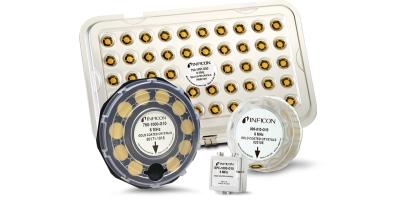 Addressing the Needs of the Market

There was previously no solution for fast Mg detection in the OLED industry. Users had to work around this Mg delay problem by precoating the crystals with Mg in the same vacuum chamber prior to the actual deposition monitoring. This additional step of pre-coating Mg takes considerable time and burdens the customer with costly and wasted materials. In addition, this precoating procedure cannot be performed by INFICON or other crystal manufacturers since the Mg coating cannot survive the exposure to atmosphere during transportation or storage. A new solution in crystal technology that renders fast and stable Mg detection without the costly and time- consuming precoating procedure is now available.

To develop the INFICON Magnesium Sensitive OLED Crystal Line, a detailed investigation was performed into all components of crystal manufacturing and processing parameters including the shape and finish of the crystal, electrode thickness, electrode materials, and the coating rate of the electrode. The materials and process parameters were optimized by fabricating a wide variety of crystals, testing them, and analyzing the results thoroughly. Using the optimized materials and process parameters proven in both research and field studies, INFICON Magnesium Sensitive OLED Crystals were born. These, and all INFICON, Maxtek, and Fil-Tech crystals are fabricated at INFICON EDC, Inc. in Kansas, USA. INFICON currently offers gold and alloy electrode materials for the Standard Mg Sensitive OLED Crystal Line. In addition, a higher grade and more stable magnesium sensitive product line of crystals (that are essentially free of activity dips) are also available for both electrode materials. Part numbers for the High Grade and the Standard lines of Mg Sensitive OLED Crystals are listed in the table below.

All the experimental results presented in this technical note were obtained using the High Grade Mg Sensitive OLED Crystals.

The crystal manufacturing processes, process parameters, and optimization steps are not discussed in more detail because this information is the intellectual property of INFICON.

After fabricating the crystals, a series of controlled experiments to characterize and evaluate the crystal quality were conducted in the INFICON facilities for verification of consistency. The electrical properties such as resistance and frequency were measured using an impedance analyzer. The quartz blank surface and finished crystals were characterized using various metrology tools including SEM (Scanning Electron Microscope) and white light interferometer.

After performing the quality examination of the crystals, Mg sensitivity tests were performed both in-house and by third-party companies to evaluate the Mg signal registration time. Both the activity and the rate stability of the INFICON Magnesium Sensitive OLED Crystals were measured. For testing, two evaporation methods were used, e-beam and thermal deposition. The deposition time, frequency, raw rate, thickness, and activity data were recorded every second using INFICON IC6 or Cygnus 2 Thin Film Deposition Controllers.

After rigorous in-house examinations of the R&D phase, the new Mg Sensitive OLED Crystals were sent out for external field tests. These Mg Sensitive OLED Crystals have received successfully positive results from three external companies. Results from two external evaluators (anonymously referred to as Company A and Company B) are presented and discussed in this application note.

The figure above shows a straightforward comparison of performance for INFICONâ€™s current High Precision alloy product (blue data) vs. the new Mg Sensitive OLED Alloy Crystal (red data) by external Company A. The magnesium source is directly controlled by the new Mg Sensitive OLED Crystal using PID control (INFICON Cygnus 2 controller) with a targeted deposition rate of ~0.4 AÌŠ/s. The exact chamber configuration, in terms of the relative positions of the Mg source and the crystals, however, were not revealed to us by Company A. As the red data shows, the response time for the Mg Sensitive OLED Crystal was almost instantaneous. In fact, one can clearly see the initial Mg source power overshooting, followed by the automatic PID control to damp the power to the desired ~0.4 AÌŠ/s rate level. As for the regular High Precision alloy crystal (blue data), the delay in detecting and reporting the true Mg deposition rate is ~2.75 hours late in comparison to the new Mg Sensitive OLED Alloy Crystal. As a result, the initial Mg power overshooting and the subsequent PID power damping actions were totally invisible using the regular crystal. It is obvious that both crystals have identical signal-to-noise ratio in terms of rate stability, and the critical improvement shown here is when the initial Mg detection begins.

One of the consequences of the ~2.75 hour delay mentioned above was a drastic difference in Mg thickness detection by current crystal products (blue data) vs. the new Mg Sensitive OLED Alloy Crystal (red data), which is shown here in the figure above from the same experiment by Company A. Since both crystals were facing the same Mg source, the true thickness should be very similar (and should only differ slightly due to the minute difference in mounting position/angle of each crystal relative to the positon of the Mg source). Since the magnesium rate detection of the Mg Sensitive OLED Alloy Crystal is almost instantaneous, the red data in the figure above can be regarded as a faithful representation of the true Mg thickness on the OLED substrate. On the other hand, the thickness reported by the INFICON High Precision crystal (blue data) was not accurate â€“ missing almost 2.75 kAÌŠ in thickness after three hours of deposition. This significant inaccuracy in thickness monitoring was the key pain point of OLED companies when employing magnesium deposition in their manufacturing process.

The advanced technology of the Mg Sensitive OLED Crystals designed for magnesium deposition becomes more obvious when these crystals are put together with the normal type of crystals in a multi-crystal exchanger. This is illustrated in the figure above, which was another evaluation experiment performed by Company B. Again, the exact chamber configuration, in terms of the relative positions of the Mg source and the crystals, were not revealed to us by Company B. The performances of regular crystals were highlighted in blue, while those of the Mg Sensitive OLED Crystals were highlighted in red. As the figure shows, it takes ~6 hours to detect a stable Mg deposition using a normal crystal in Company Bâ€™s OLED chamber configuration. In contrast, the improvement in terms of initial magnesium detection delay was obvious and significant using the Mg sensitive crystals. Since all the crystals in this experiment were placed in the same crystal exchanger, there is no difference in position of each crystal relative to the location of the Mg source.

In 2020, INFICON released the High Precision Sensor Crystal Line by optimizing many crystal manufacturing process steps, parameters, and materials. A wide range of experiments were performed to ensure that the INFICON High Precision Sensor Crystals have higher stability in rate monitoring and in activity, as well as render high reproducibility in batch-to-batch crystal manufacturing.

The Mg Sensitive OLED Crystals discussed in this application note are designed specifically for magnesium deposition problems in the OLED industry. These higher-level crystals not only significantly shorten the initial time delay in magnesium monitoring, but also preserve all the high stability and reproducibility of the INFICON High Precision Sensor Crystals, mentioned above.

For more information on INFICON's solutions for the OLED industry, contact the company here.