» DSCC: production costs of miniLED TVs to be higher than...

DSCC published an interesting post that details the production costs of both WOLED and miniLED TV panels. So first of all, it details LG's current costs for producing OLED TVs, as you can see in the chart below. The costs of producing larger 77-inch and 8-3inch panels are significantly larger than the costs of 65-inch and smaller TV panels:

Interestingly, DSCC says that in 2020, the production costs in LG's Guangzhou fab was higher than the costs in LG's Korean OLED TV fab as the yields in Korea are higher - but this will change in 2021 as China has lower costs for depreciation, personnel and more. DSCC estimates that production costs for a 55-inch or 65-inch WOLED panel will be 14% lower in China than in Korea. 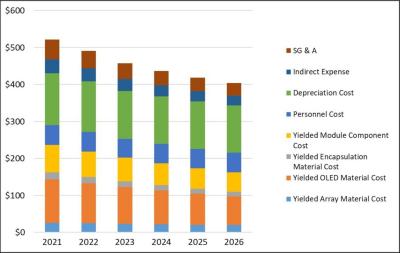 This gap will get smaller as costs of miniLEDs are expected to decrease faster than the costs of WOLED, so by 2025 both display technologies will cost the same to produce. It is will be interesting to watch the market dynamics - miniLEDs have an excellent image quality, but OLEDs will likely provide a better image quality. Production capacity for OLED displays though will likely limit adoption in the market (LGD usually runs its OLED TV production lines at an almost 100% utilization rate), which will enable perhaps higher miniLED TVs sales in total as retail prices of OLEDs may remain higher. Obcviously miniLED TV makers will produce displays with different feature sets, so these can end up cheaper or more expensive than OLED TVs.